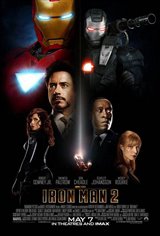 Iron Man was created by writer/editor Stan Lee, and made his debut in the Marvel comic book Tales of Suspense #39 in March 1963.

Since that time, he's undergone a lot of changes, but his irreverent attitude has been there since the beginning. In the wake of the Vietnam War, the U.S. was facing something unprecedented — a war that the people didn't want to fight. The country fell into political turmoil, with the majority of young people — Marvel's key demographic — opposing the war.

Marvel icons Stan Lee, Jack Kirby, Larry Lieber and Don Heck decided to challenge their audiences with Tony Stark. Tony was everything young people were moving away from. He was a self-absorbed, materialistic weapons manufacturer who was firmly anti-communist. Tony Stark was regularly fighting Vietnamese bad guys.

Tony Stark is the son of weapons manufacturer Howard Stark, who founded Stark Industries. Howard is a technological genius who, in the comics, worked on the Manhattan Project and developed nuclear weapons that helped put an end to World War II. Howard's genius was surpassed only by his son.

A boy genius, Tony was 15 when he was admitted into MIT. Tony inherited his father's company after the death of his parents. While Tony is heading Stark Industries, Vietnamese commander Wong-Chu abducts him. Tony sustains life-threatening injuries after shrapnel is lodged in his heart. It is thanks to another captive's kindness and resourcefulness that a magnetic system is installed in his chest. Stark and his fellow captive Yinsen work together on an iron suit that will help them escape. When Yinsen dies in the escape, Stark swears vengeance on the Vietnamese army.

In spite of all of his arrogance and militarism, Iron Man was an instant hit. Marvel was flooded with fan mail from women of all ages. Female readers just couldn't get enough of Tony's confident sex appeal.

Iron Man's views of the Vietnam War changed as time went on. In the comics Stark eventually decidedto change the direction of Stark industries and his aggressive anti-Communist stance softened. By the 1990s, the comics adapted Tony Stark's origin story. Stark was now Generation X and his kidnapping occurred during the Gulf War.

One of the most compelling storylines in the Marvel comics is Stark's alcoholism. In the 1980s Tony actually quits being Iron Man and becomes a homeless drunk. The audience gets to see a man gradually fall from grace, and slowly pick himself back up. Iron Man #200 - Resolutions is considered one of the greatest comics of all time.

By 2008 superhero movies were a proven success. The Sam Rami Spider-Man movies were blockbuster hits, as was 20th Century Fox's X-Men. Marvel had an untapped well of superheroes to explore. They knew that if Iron Man became a blockbuster, it could have the potential for a long-awaited Avengers film. The stakes were also high for the film's star, Robert Downey Jr., who had fallen from grace due to his public drug problems. This movie could either reestablish him in Hollywood, or plunge him into the depths of obscurity.

The Iron Man movie was really a first for Iron Man. The Fantastic Four, The Incredible Hulk, Spider-Man and other iconic superheroes had all gotten their shot on the big screen in the past. This was not the case for Iron Man.

Before 2008 Iron Man was known mostly to comic book nerds and Black Sabbath fans. Mainstream audiences had never seen Iron Man in any capacity. Making a big budget summer movie out of Iron Man was something of a financial risk.

Thanks to the writing, production values, and Robert Downey Jr.'s impeccable acting, Iron Man was a hit. In this incarnation, Tony Stark lives in the modern day. His kidnapping takes place in Afghanistan, and the escape plot and Yinsen's sacrifice remain intact. Rather than becoming more militaristic, Tony decides to stop making weapons.

Tony is an arrogant playboy in the beginning, but he grows into a fully developed character with insecurities and vulnerabilities. The film is not only the first Iron Man movie, but it is also the first movie in the Marvel Cinematic Universe. The film introduces us to S.H.I.E.L.D. and in a post credits scene, S.H.I.E.L.D.'s director Nick Fury (Samuel L. Jackson) asks Tony to discuss an "Avengers initiative."

It's difficult to balance the militaristic nature of the Iron Man comics with the 21st-century's anti-militaristic stance. These movies are made for all ages, and so Tony Stark can't be a sexist pig who loves violence. The movie Iron Man is the ultimate example of a character arc. Tony begins as he was in the comics: rude, brash, arrogant. He has a life-changing experience in captivity, and comes home a changed man. The secretary he once neglected, Pepper Potts, is now someone Tony can open up to. He even falls in love with her.

Though he's the "Invincible Iron Man" in the comics, in the movie Tony's suit goes through rigorous trial and error before being ready. Even then it's a constant process of fixing bugs and improving the suit that continues to this day. As of 2016 there have been 46 Iron Man suits in the Marvel cinematic universe.

The Marvel Cinematic Universe made both Tony and his father younger than they were in the 1960s comics. Howard Stark was now a very young man in World War II and Tony was born in the 1960s. In Captain America: Civil War Tony's parents are shown to have been killed in 1991. The decision to have Tony abducted by Afghan terrorists was logical, since the U.S. was fighting in Afghanistan in 2008.