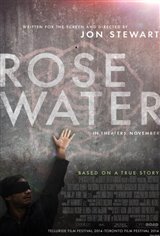 Jon Stewart's directorial debut, Rosewater, chronicles the imprisonment and torture of real-life Iranian Canadian journalist and filmmaker Maziar Bahari, played by Gael García Bernal. Based on his best-selling memoir Then They Came For Me, the film is a journey into Bahari's memory as he tries to cope with the extreme physical and psychological torture he endured during his four-month incarceration.

Bahari was born in Tehran in 1967, where he lived with his family before moving to Montreal in 1988 and earning a degree in communications at Concordia University. While at university he also studied film, which led to his work as a producer and director of documentaries and shorts. His first documentary, made in 1995, called The Voyage of St. Louis, was about a group of 937 Jewish German refugees trying to escape Nazi Germany. In an interview with Moment Magazine, Bahari said the film led to the accusation, during his imprisonment, that he was on a mission to work for Zionists.

Bahari also began to work as a journalist, most notably as a reporter for Newsweek from 1998 to 2011. He was also published in New Statesman and wrote an op-ed piece for The New York Times about working as a journalist in Iran.

It was his tireless work as an international correspondent covering the 2009 Iran presidential elections that eventually led to his arrest without charge in June 2009. Bahari was taken from his mother's home to a jail cell in Tehran's Evin Prison, where he was given little exercise, no information about the outside world and was subjected to excessive interrogation and torture.

"I thought I had done everything I could to avoid this suffering, and yet now the authorities had come for me," Bahari wrote in his memoir. "I had taken every precaution and even censored myself in an attempt to stay below the radar."

His interrogator, whom he named "Rosewater" because he smelled of the familiar fragrance, would beat him and use methods of psychological torture in order to obtain information. At one point in his interrogation, and as a small part of the fictitious charges placed on him, they played a short segment of the Daily Show with Jon Stewart, where, during a satirical skit, an actor posed as an American spy in Iran and interviewed Bahari. Stewart invited Bahari on the show several more times after his release and was inspired by his memoir to make the film.

In his memoir, Bahari recounts that part of what kept him whole during his time in solitary confinement was having imaginary conversations with his deceased father and sister, both of whom were arrested and tortured on separate occasions. "Their memories, their love, it gave me inspiration," Bahari said during an interview with Stewart.

Eventually, in desperation, Bahari agreed to make a video confession where he admit to being a spy for Western media, and confessed to covering "illegal demonstrations" and "illegal gatherings." After Bahari's fake confession, his wife began a campaign to free him, which was backed by organizations such as the Committee to Protect Journalists and documentary filmmaking groups. U.S. Secretary of State at the time, Hillary Clinton, was also an important public proponent in the campaign to free Bahari.

The intense public and political pressure to free Bahari eventually culminated in his release on $300,000 bail (or three billion rials) on Oct. 17, a full 118 days since his arrest. ~Kelly Townsend