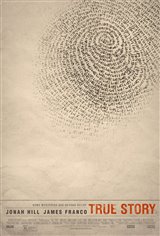 Following the trend of movies being based on true stories is the Rupert Goold-directed adaptation True Story, starring James Franco and Jonah Hill. The film is based on true events surrounding the relationship of journalist Michael Finkel and accused murderer Christian Longo as described in Finkel’s book True Story: Murder, Memoir, Mea Culpa. Michael Finkel was an up-and-coming writer at the New York Times Magazine in 2001 with five cover stories in less than two years. He had also been featured in numerous other publications, including: Skiing, Sports Illustrated and National Geographic Adventure. However, his career came to a thundering crash when he took liberties in his article, "Is Youssouf Malé a Slave?" In the article, which was about child slavery on an Ivory Coast cocoa plantation, Finkel fabricated the main character’s story by combining interviews and experiences of multiple children. He had committed one of the worst crimes in journalism—lying to your readers—and eventually confessed to the crime. He was quickly fired from the New York Times Magazine and publicly shamed. A few days after losing his job, Finkel received a phone call about the arrest of a complete stranger—Christian Longo—who had been accused of four counts of murder. As it turns out, Longo had been living in Mexico using Finkel’s name. Longo — who was accused of strangling his wife and three children and then dumping them in the water in both suitcases and weighted pillowcases— had adopted Finkel’s name because he was a fan of his work and had his own dreams of being a writer. Finkel saw an opportunity to benefit from someone else’s misfortune and a chance for redemption in his career if he could tell Longo’s story. He reached out to Longo in jail and to his surprise the murderer responded. The two men developed an intense and twisted friendship: having visitations in jail, sending thousands of letters and making hundreds of phone calls back and forth. The two were extremely open with each another except when it came to Longo discussing the actual murders. When it came down to it, their friendship was about both men using the other to try and start over, which Finkel discovered on the first day of court when he came to the realization Longo had been practicing his defence on him all along. In the end, Longo was sentenced to death for the murder of his family and he is still on death row. Finkel went on to write a book, titled, True Story: Murder, Memoir, Mea Culpa, in which he documents his mistakes and his relationship with Longo. ~Janine Wyslobicky