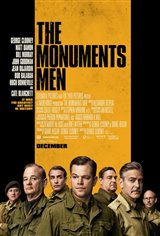 Formed during World War II to preserve the culture of Europe by retrieving and preserving notable works of art and monuments from destruction at the hands of Hitler and the Nazis, the Monuments Men consisted of approximately 345 men and women from 13 different countries who volunteered to take part in the Monuments, Fine Arts, and Archives section (MFAA) during World War II. Initially, this amounted to maintaining churches, museums, and other monuments, but after the army ventured into Nazi-occupied territory, they began focusing on movable objects such as paintings and sculptures. These objects of cultural importance were seized by the Third Reich, and included paintings from Leonardo da Vinci, Jan Vermeer and Rembrandt, as well as sculptures by Michelangelo and Donatello.

By the end of combat, roughly 60 Monuments Men remained, amongst which was a notable group responsible for northern Europe, including Netherlands, Germany, and Austria. Included in the group were Major Ronald Edmund Balfour, Captain Walker Hancock, Captain Robert Posey, Second Lieutenant James J. Rorimer and Lieutenant George Stout. Stout is recognized as one of the first people to understand the importance of preventing the destruction of cultural objects from Hitler and the Nazis. An expert on art conservation practices at Harvard, he helped establish the American Defense Harvard Group, which was influential in the formation of the American Commission for the Protection and Salvage of Artistic and historic Monuments in War Areas – later known as the Roberts Commission – on June 23, 1943 by President Theodore Roosevelt.

After the establishment of the MFAA section of the Commission, Stout operated as the field officer and gave guidance and leadership to all other Monuments Men. He helped bring notable museum curator and fellow Harvard graduate James J. Rorimer on board early on through the recommendation of his professor Paul Sachs. They were aided by Jacques Jaujard, Director of the French National Museums, and his employee and confidant Rose Valland, who worked at Jeu de Paume Museum in Paris. After Jeu de Paume Museum was taken over by Nazis during the Occupation of Paris in October 1940, Valland was instructed by Jacques to stay on and spy on the Nazis. Her subsequent work with Rorimer helped discover the Neuschwanstein Castle in southern Germany, which housed the private French collections looted by the official Nazi operation.

There was no historical precedent for the actions and achievements of the Monuments Men. They went to the front lines of the war to ensure important pieces of human culture were preserved, and ultimately returned over five million artistic and cultural items. After the end of the war in September 1945, they continued their efforts to maintain and study art in Europe and abroad as curators, scholars, and historians.