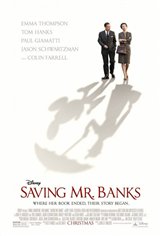 Walt Disney’s daughters loved the Mary Poppins book series written by British novelist P.L. (Pamela Lyndon) Travers so much that he promised them he would turn those books into a movie.

Travers was her pen name—she was actually born Helen Lyndon Goff in Australia, to a poor family. Her alcoholic father died when Lyndon (as she was called) was seven, and her mother, feeling overwhelmed at having to raise three young daughters, often threatened to kill herself (but thankfully never did). Travers tried her hand at stage acting and dancing before moving to England to become a writer.

By the time Disney approached Travers, she had already turned down several offers from different production studios to turn her books into a movie. Undaunted, Mr. Disney felt that he could change her mind. It took Walt almost 20 years to convince Travers to give him the film rights to her books. The author did not believe a film version would do her books and characters justice and when Walt made his first request in 1938, she felt Disney had not enough experience with live action films, as most of his productions were cartoons.

Travers detested the idea of an animated version of her books. When she finally agreed to let him make Mary Poppins into a film, her deal included $100,000, a cut of the film's gross and script approval. When she saw the final cut of the film, there were a lot of things she wanted to cut out, including the animated sequence.

However, at that point, her opinion did not matter, as she did not have the rights to film editing and her contract stated that Walt had final say. When the movie premiered, Travers did not even get an invite from Walt Disney Studios to attend the premiere—she managed to find herself a ticket. Despite looking happy in pictures that documented the evening, throughout the whole screening Travers cried, as she felt that the movie ruined her ideas and characters.

After viewing the movie, she said, “Julie Andrews, a friend of mine, has all the necessary integrity to play the part—she was just directed wrongly. She was quite prepared to put on a black wig, with a knob of hair at the back, and a turned-up nose. She's a great trooper and very honest. But to her surprise, as well as mine, Disney turned her into a very pretty girl, which really loses the point."

Despite the movie’s success, Travers remained appalled about how the adaptation turned out. She swore that as long as she was alive, Disney would never spoil Mary Poppins again. She flatly refused when he asked to make a sequel.

As far as any stage adaptations, Travers wanted only English-born writers to be involved; no one associated with the film was allowed.

Travers died at the age of 96 on April 23, 1996. Although she never married, she left behind one child—a boy named Camillus, whom she’d adopted when she was 40. Strangely, although Camillus had a twin, Travers refused to adopt his brother and never even told him he was a twin—he found out by chance when he was 17.

Her wishes for Disney to not be involved with a stage adaptation were not honored as on November 16, 2006, Disney premiered the Broadway version of Mary Poppins, which won a Tony award for best scenic design. It closed six years later on March 3, 2013.

The story of her association with Walt Disney was turned into a movie titled Saving Mr. Banks, starring Tom Hanks as Walt and Emma Thomson, who wrote and starred in the Nanny McPhee movies as an unattractive yet magical nanny, as Travers.