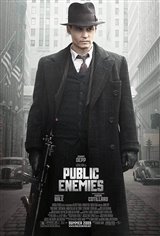 The stock market crash of 1929 brought poverty and despair to millions across the U.S.A., who lost their entire life savings. Throughout the 1930s, they found comfort where they could, in small things like watching a smiling little girl named Shirley Temple sing and dance her way across the movie screen for five cents admission.

For some, criminals like John Dillinger, "Pretty Boy Floyd" and Bonnie and Clyde, were, if not an inspiration, a source of hope and gratification. Their exploits brought them fame and admiration. While ordinary folk struggled to survive, they were outsmarting the forces that seemed to be beating down most of the population.

A motherless boy who'd been in and out of juvenile court most of his childhood, Dillinger was born June 22, 1903. While underage, he'd been part of a gang who'd raped a girl, had been charged with theft and had nearly killed his closest friend. Dropping out of school at 16, he idolized Jesse James, who'd been a Robin Hood type figure in the Wild West.

After getting a girl pregnant and stealing a car from a church, Dillinger joined the U.S. navy. Less than five months later, he deserted. He married a 16-year-old girl, but his life of crime continued. He stole chickens and graduated to robbing a grocery store. Dillinger and his accomplice, Ed Singleton, were quickly apprehended. Singleton was sentenced to two years, but Dillinger was convicted of assault and battery with attempt to rob, and conspiracy to commit a felony. He was given joint sentences of 2 to 14 years and 10 to 20 years in prison. His wife sought a divorce in 1929. Bitter about his harsh sentencing (he wrote his father a letter that read: "Of course, Dad, most of the blame lies with me for my environment was of the best but if I had gotten off more leniently when I made my first mistake this would never have happened."), when he wasn't trying to escape, engaging in fistfights, gambling or otherwise defying prison regulations, Dillinger made the most of his time in jail. Imprisoned with seasoned bank robbers, he learned the tricks of the trade. Paroled in 1933, he almost immediately robbed a bank. He was arrested on September 22nd and placed in the county jail in Lima, Ohio.

Shortly after, pals of his from Michigan City prison broke themselves out using plans that Dillinger had drafted and money he'd put aside especially for their escape. The escapees went directly to Lima jail where they shot the sheriff, who later died, and broke Dillinger out.

Dubbed the "Terror gang," they pulled several bank robberies and committed burglaries at police arsenals that netted them machine guns, rifles, guns, ammunition and bulletproof vests. They pulled off bank robberies with flair, showing incredible nerve and grossing hundreds of thousands of dollars. Dillinger and his gang became known for their daring, including staying in a bank until they'd gotten the money they'd come for, even after the alarm had been activated; taking hostages and letting them go later, unharmed; and for not taking cash that belonged to customers—taking only money that belonged to the bank. Dillinger himself became known for his athleticism—leaping over high counters to get to the cash and for his impressive driving ability in escaping police during high speed car chases.

In 1934, the gang was caught when a fire broke out in the hotel where they were staying. Dillinger was put in an "escape proof" jail in Crown Point, Indiana. Once again, he outsmarted the authorities by threatening the guards with a wooden gun and forcing them to open up the door to his cell. Once out, he freed other three other prisoners and drove the sheriff's car to Chicago, Illinois but in doing so, he was committing a Federal offense—transporting a stolen motor vehicle across a state line. This allowed the FBI to become involved in the search for Dillinger, who was now providing nationwide headlines and gaining more and more fans.

Dillinger formed the "Dillinger Gang", which included Lester "Baby Face Nelson" Gillis, a psychopathic young man with a quick temper who'd been part of the Capone gang. One of Dillinger's new escapades included having a gang member pose as a film producer who wanted to make a gangster film in the town they were about to hit, to put people off guard when the real thing occurred. Then, as they made their getaway surrounded by police, they had hostages stand on the running boards of the getaway car, so the police didn't have a clear shot. They even stopped to let off one of the hostages, an older woman, when she told them they were passing her house.

On March 30, 1934, Dillinger had a close call with the law. He and his gang were vacationing at a summer resort in Wisconsin. The owner, Emil Wanatka, noticed that his customers were wearing guns in shoulder holsters. He put two and two together. Dillinger told him, "Don't worry. I want to sleep and eat a few days. I want to rest up. I'll pay you well and then we'll all get out."

Wanatka's fears were not allayed. He had a wife and a 10-year-old son. For the next few days, Dillinger's gang monitored all of Wanatka's phone calls and accompanied them to town. In particular, Baby Face Nelson, whose behavior was erratic, terrified him and made him afraid for the lives of his family and staff.

He managed to get a letter in the mail when no one was looking—to a man he knew in the U.S. Attorney's office. The FBI were called in. It would prove to be one of their biggest bungles of all time. While people were exiting the lodge, an innocent man was killed. Two other innocent people were wounded and one agent was killed. People were up in arms, worried that FBI agents would shoot more innocent people in the future in their quest to get Dillinger.

On June 30, 1934, the Dillinger gang experienced their bloodiest bank robbery ever—and their last. Police were attracted to the bank when they heard machine gun fire. One officer was shot and killed by gang member Van Meter, who also wounded three pedestrians in the melee. When Dillinger exited the bank with hostages, the police fired at him but hit the hostages instead. Van Meter was shot in the head by police but was dragged into the getaway car by Dillinger and later treated successfully for his injury.

On July 21, 1934, Anna Cumpanas, who ran a bar/brothel in Gary, Indiana, called the police with a proposal. She was an illegal immigrant from Rumania, and was willing to sell the FBI information about Dillinger, if they prevent her deportation.

She sang like a canary, telling the agents that a friend of hers, Polly Hamilton, had visited her with Dillinger and informing them that she, Polly and Dillinger would be going to the movies the following evening. Sure enough, at 8:30 on Sunday, July 22nd, Anna, Polly and John walked into the Biograph Theater to see Manhattan Melodrama, starring Clark Gable.

Hoover cautioned the agents to wait outside for Dillinger's departure. Dillinger strolled out of the theater at 10:30 p.m., with a female companion on each side. They walked past a doorway where an agent, Melvin Purvis, was standing. Purvis gave a signal for the other men to act. Dillinger sensed something was wrong and ran toward an alley.

Three FBI agents shot at Dillinger. Three of the five bullets shot hit Dillinger and he fell, face down. He was pronounced dead at 10:50 p.m. on July 22, 1934 at the Alexian Brothers Hospital. He was 31 years old. Each of the three Agents—Charles B. Winstead, Clarence O. Hurt, and Herman E. Hollis—who fired at Dillinger were commended by Hoover for fearlessness and courageous action. Exactly which one killed Dillinger was never revealed. Baby Face Nelson was killed just a few months later on November 27th during a gun battle with the FBI in which Special Agents Cowley and Hollis were also killed.