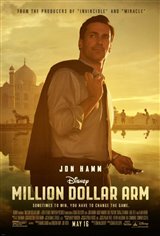 Million Dollar Arm is a biographical sports drama about a struggling sports agent, J.B. Bernstein, who must come up with the next big thing before competitors edge him out of the game. After watching a cricket game on TV, he ventures to India and puts on a national competition to look for the “Million Dollar Arm” that could potentially become the next baseball pitching sensation. This film is inspired by the real life story of Bernstein and the Indian reality TV contest that eventually led to the first two Indian men signing professional sports contracts in the United States: Rinku Singh and Dinesh Patel.

Both Rinku (born in 1988) and Dinesh (born in 1989) grew up in impoverished circumstances and spent a great deal of time in sports. As a child, Rinku played cricket and threw javelin, and Dinesh started to train in javelin at age 14. In 2008, American sports agent J.B. Bernstein went to India in search of new baseball talent. He organized a national TV reality contest called The Million Dollar Arm in the hope that he would track down an individual with superb baseball pitching skills.

The contest offered the winner a deal that he wouldn’t be able to refuse: a huge sum of money, professional baseball training in the U.S. and the opportunity to try out for a Major League Baseball team. Along with over 37,000 contestants, Rinku and Dinesh signed up for the contest, and although neither had ever heard of baseball before the contest, Rinku managed to finish on top after pitching 88 miles per hour. Dinesh came in as a runner-up, and together, the two young hopefuls traveled to Los Angeles and trained with USC pitching coach Tom House, who had previously worked with baseball giants like Nolan Ryan and Randy Johnson.

Throughout their training, Rinu and Dinesh were faced with a language and culture barrier, and they had to learn how to speak English and adapt to American culture. House and Bernstein continued to train and mentor the boys, who eventually tried out for scouts from over 20 MLB teams in November 2008. Rinku and Dinesh became the first Indian men to sign MLB contracts after they were scouted by the Pittsburgh Pirates. In 2009, Rinku started pitching for the Pirates and enjoyed a successful run with the team. Where Are They Now? Rinku Singh: He ventured on to pitching for Australian and Dominican leagues in 2010 and 2011. In 2013 he sat out an entire season due to injuries but in 2014, the Pirates invited him to spring training. He became a vegetarian in 2012 when he was back home in India for awhile, after watching men chase a chicken to kill it.

Dinesh Patel: After a successful 2009 season with the Pirates, his 2010 season was not as successful and he was released from his contract in December 2010. Dinesh returned to Delhi where he taught baseball to children and helped village boys prepare for the second season of Million Dollar Arm. He also went back to school and returned to the sport of javelin and in April 2012 competed in the Federation Cup athletics championship. With the money he earned as a professional baseball player in the United States, he was able to pay for his sister's wedding and help his family renovate their house.