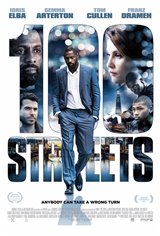 Max (Idris Elba) is a former rugby superstar and father of two whose life has taken a rapid downturn due to many poor life decisions. Living in what's left of his former glory, Max can't seem to keep his family together because of a serious substance abuse problem. And thanks to several infidelities, his wife Emily (Gemma Arterton) has left him.

When Max discovers that his wife has been sleeping with another man (Tom Cullen), he's sent into a violent and seemingly unstoppable rage on the cold and dark streets of London.