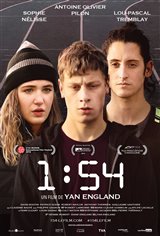 Tim (Antoine Olivier Pilon) is a shy 16-year-old who joins the track team. When the coach asks each team member what their goals are, both he and a student named Jeff (Lou-Pascal Tremblay) say their goal is to compete at Nationals in the 800 metres.

That's all it takes for Tim to become the object of bullying. It doesn't help that his best friend Francis is also bullied, with the athletes accusing him of being gay. However, when Tim makes friends with a girl named Jen (Sophie Nélisse), things begin to look up a little bit. She tells him his running times are starting to worry Jeff, who was the star of the team before Tim joined.

The bullying escalates from food throwing and name calling to physical attacks. When Tim is pressured to give names of the kids bullying him, he refuses, saying he prefers to take care of it himself. Tim pushes himself to get a time of 1:52, which is needed to compete at Nationals, but the pressure he undergoes from his family and his coaches pushes him close to the edge, both physically and mentally.