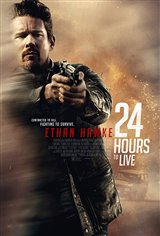 Former elite soldier turned mercenary hitman Travis Conrad (Ethan Hawke) wakes up on an operating table and remembers what has happened to him. He remembers that he gave his entire life an agency known as Red Mountain until they betrayed him. They caused the deaths of his wife and young son, taking away his future.

Critically injured, he's brought back to life, but as he sees by a digital clock embedded in his arm, counting down his minutes, he has less than 24 hours to live – again. He gets a mysterious phone call telling him that if he finishes one last job for Red Mountain, his life will be extended.