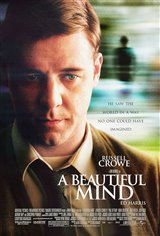 Watch Trailer
Highly eccentric mathematician John Forbes Nash Jr. (Crowe) was a pioneer in the field of game theory, which made him a star of the 'new mathematics' in the 1950s. But his quick ascent into the intellectual stratosphere drastically changed course when Nash's intuitive brilliance was undermined by schizophrenia.

Facing challenges that destroyed many others, Nash fought back with the help of his devoted wife Alicia (Connelly). After decades of hardship, he triumphed over tragedy, and in 1994 he received the Nobel Prize.

A Beautiful Mind is based on a true story and was nominated for eight Academy Awards, winning four: Best Picture, Best Actress in a Supporting Role, Best Director, and Best Screenplay based on Material Previously Produced or Published.