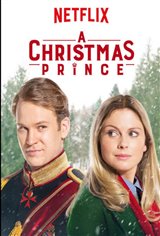 When junior editor Amber (Rose McIver) is finally assigned a story of her own, it means she'll have to miss Christmas in New York City with her widowed father. She's sent abroad to get the inside scoop on dashing playboy Prince Richard (Ben Lamb), who's in line to be King of Aldovia following his father's recent death.

However, a media conference at the palace is cancelled before it begins when the prince doesn't show up. Unwilling to give up and go home without a story, Amber doesn't get back on the media bus that's taking the journalists back into town. She sneaks in a side entrance of the castle and is mistaken for Princess Emily's new American tutor, who was due to arrive after the holidays. Amber goes along with it, saying her last assignment ended early. She winds up living at the palace as the tutor for Prince Richard's younger sister. While there, she tries to get as much information as possible about whether or not Richard is going to accept the throne, or whether he's planning to give it up and let his cousin Simon ascend to the throne instead.