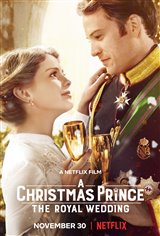 A year after helping Richard (Ben Lamb) earn his place as King, Amber (Rose McIver) returns with her father, Rudy (John Guerrasio), to Aldovia to plan their royal wedding. However, she soon discovers that flamboyant and temperamental designer named Sahil (Raj Bajaj) has been hired by Mrs. Averill (Sarah Douglas) to design the dress and take over organization of the wedding, leaving Amber without a say.

While Richard is distracted by the New Aldovia initiative, which is meant to increase employment, Amber discovers why the program isn't working, but is instead taking the money out of the country.