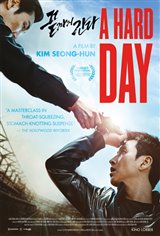 On his way to his mother's funeral, homicide detective Gun-soo hits a man with his car on a dark rural street. Under an enormous amount of stress at work, he panics and decides to dump the body in his mother's coffin.

A few days later while going through open cases, Gun-soo finds a report on his accident victim. His colleague has been assigned to the case and is making progress. To make matters worse, a detective named Park wants the body and claims to be a witness. When Gun-soo digs up his mother's grave, things become more clear when he finds gunshot wounds on the accident victim's body.