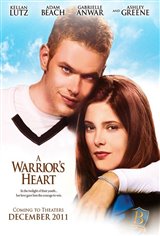 Star Lacrosse player Conor Sullivan (Kellan Lutz) begins acting out after losing his Marine father, who was killed unexpectedly during battle. Desperate to save her son from his own self-destructive behavior, Conor's mother enrolls him in a rigid wilderness Lacross camp under the instruction of his father's old combat buddy. The experience not only helps Conor perfect the sport, but also winds up teaching him a thing or two about growing up, accepting responsiblity, and even the meaning of love.