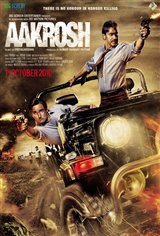 9 votes and 2 Reviews | Write a Review

AAKROSH is an adaptation from an article of Times of India during the time of 1995, the story is about Honour Killings.

LISTEN TO YOUR HEART AND YOU DIE...

The film revolves around a lower caste guy who had gone along with his 2 friends to a village—Jhanjhar in Bihar, his native place, to watch Ramleela. These 3 students of Delhi University go missing in the dusty village. In the previous 3 months there was no clue where the young students have vanished. Media and students movement all over Bihar takes a pivotal step for getting hint of these students, its then government appoints CBI officers Sidhant Chaturvedi and Pratap Kumar and find out the truth under it. A person residing in Bihar himself and, Pratap understands the intricacies of race relations in small towns like Jhanjhar. Pratap tries to use his charm and smartness to crack investigation whereas Sidhant has a very no non sense, direct approach investigation. It’s simply a clash of personalities and ideologies.

Investigating in Jhanjhar becomes a tough task for these officers as the local police force Headed by Bhura Ram with the help of local MPs and landlords run a major branch of the Shool Sena. At the same time the two officers cannot break the ice with local Low cast community members, due to years of fear instilled in them by regular and highly planned Shool sena attacks. Roshni (daughter of the most powerful and richest person of village) acts as a key element to reveal certain realities and give a new direction to the investigation.

Soon the effect of their investigation causes mayhem in Jhanjhar, with riots, burning of houses and killing of peasants in broad daylight. Slowly Pratap with Siddhant's help starts cracking the case by exerting his influence upon Geeta (a victim to the same inhumanity), who acts as a final key to the investigation. How amongst the animosity created by Shool Sena and the fear of losing more peasants do Pratap and Sidhant solve this mysterious case is explained with a chain of exciting, funny and intelligent events that form the climax of the story.