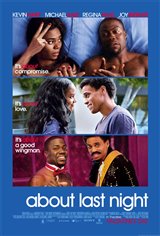 This remake of the 1986 film About Last Night... follows single men Danny (Michael Ealy) and Bernie (Kevin Hart)—bachelors who live their lives on the wild side. When Bernie meets Joan (Regina Hall) at bar one night, the two hit it off and start dating.

Bernie introduces Danny to Joan’s roommate Debbie (Joy Bryant). Although the boys initially were just looking for one-night stands, their relationships become more than that.

The original film was loosely based on the play Sexual Perversity in Chicago by David Mamet.