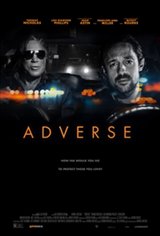 Since their mother died, Ethan (Thomas Ian Nicholas) has been responsible for his rebellious 16-year-old sister Mia (Kelly Arjen). Despite his best efforts as her guardian, he worries that Mia is spending too much time being influenced by her sleazy boyfriend Lars (Jake T. Austin). When she not only falls in with the wrong type of people but owes them money, she disappears without a trace.

Ethan, who works as a driver for a ride-share company, discovers a ruthless crime boss named Kaden (Mickey Rourke) is responsible and decides to get close to him, becoming his driver in order to find out the truth. One by one Ethan hunts down members of Kaden's crew as he prepares to confront Kaden himself.