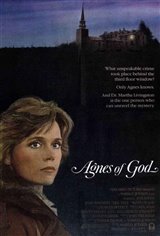 Agnes of God is an opened up adaptation of the minimalist stage play by John Pielmeier. Meg Tilly plays a young nun who secretly gives birth to a baby; the child's body is later found strangled to death.

Court-appointed psychiatrist Jane Fonda is sent to the convent to investigate, a task made difficult by the weathervane behavior of mother superior Anne Bancroft. To draw out Tilly, who remembers nothing of the birth, Fonda suggests that hypnosis is called for.

Playwright Pielmeier poses many questions--is Tilly a pure-and-simple murderess, or was there something divine in her act?--but offers frustratingly few answers. The evocative photography is by longtime Ingmar Bergman associate Sven Nykvist.