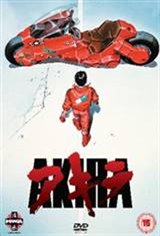 One of the most influential examples of anime, Akira is based on the manga (comic book) by Katsuhiro Otomo. The story is set in the post-apocalyptic community of Neo-Tokyo. Tetsuo is a fiercely individualistic member of a scroungy motorcycle gang.

The despotic authorities, the robot-like police, and even the cycle gang pursue Tetsuo when he's bombarded with a new, insidious energy source that has rendered him telekinetic. Budgeted at eight million dollars, Akira has become a cult favorite in the States thanks to generous midnight-movie exposure and its availibilty on video and cable TV.