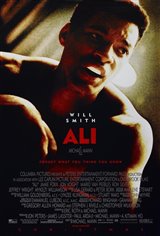 Cassius Clay (Smith) was a smart-talking, fast-stepping ball of fire, in the ring, and out, who lit up professional sports in the 1960's, eventually dropping his slave name and becoming Muhammad Ali, and refusing to go to Vietnam. He eventually became a champion, a leader, and a media superfigure.