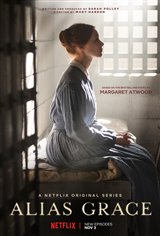 It soon becomes clear to Grace that Nancy is more than just Kinnear's housekeeper. This riles McDermott, who hates being bossed by a woman whom he considers beneath him. He decides to murder both Nancy and Kinnear, steal the valuables and make a run for it to the United States. Grace tries to talk him out of it, but winds up being an accomplice. Afterwards, when they're located, they're brought back to Toronto, where they go on trial for the murders.

Based on Canadian author Margaret Atwood's bestselling book of the same name, which is based on a true story.