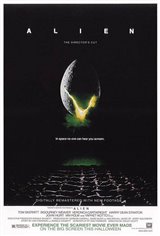 When the crew of the space cargo ship Nostromo lands on a planet in response to a an SOS, the crew members come upon strange pods, one of which spews forth a fleshy insect-like creature that locks on to the face of crewmember Kane (Hurt). Despite Ripley's (Weaver) advice, science officer Ash allows Kane to return to the ship, where the creature finally releases its grip. Along with the ship's captain, Dallas (Skerritt), the crew must find the unknown alien in order to kill it or be killed.