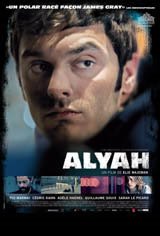 Alex, a young Parisian dealer of Jewish origin, decides to move to Tel Aviv to work at his cousin’s new restaurant. Although his older brother Isaac, who often leans on him for money, tries to talk him out of moving, Alex is determined. In addition to taking takes Hebrew language lessons, Alex needs to convince the immigration authorities that he’ll be an exemplary Israeli citizen. He also needs the funds to get there and puts his plans in jeopardy by selling more drugs to finance his Aliyah—a return to the Holy Land. Torn between his ambition, his family duty and his love for Jeanne, a gentile girl he recently met but for whom he has strong feelings, Alex doesn’t know what to do.