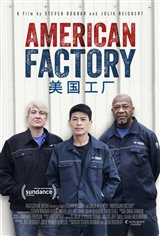 This documentary takes a look at what happened when General Motors closed a plant in Dayton, Ohio in December 2008, putting thousands of Americans out of work at the same time the U.S. government began a multibillion dollar bailout of the auto industry.

In 2016, Chinese billionaire Cao Dewang opened a division of his global auto-glass manufacturing company Fuyao Glass America in the plant, investing millions in the business and hiring over 1,000 local workers. Although at first Chinese had to get used to working with Americans, who seemed to them slow to learn and less productive than the Chinese workers they were used to back home, they soon bonded and found new respect for them. The Americans, for their part, learned to enjoy the Chinese way, which includes encouraging the workers with singalongs, team-building exercises and concerts.