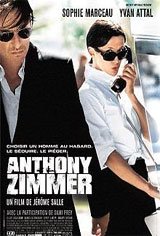 Anthony Zimmer, an international money laundering genius, is wanted by police all over the world. The problem is, nobody knows what he looks or sounds like, because he frequently undergoes cosmetic surgery on his face and alters his voice. High-ranking police official Akerman (Sami Frey) knows that Zimmer will risk anything to see Chiara (Sophie Marceau), a beautiful young woman, again, so he has her followed.

Chiara receives a message from Zimmer: hook up with a stranger to throw the police off his scent. She approaches François Taillandier (Yvan Attal), an ordinary man, who, immediately attracted to the young beauty, accepts her invitation to share her bed. The next day, François finds himself in the middle of a nightmare with not only the police, but the mafia on his trail.