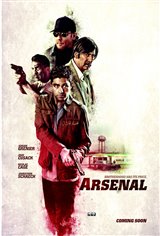 JP (Adrian Grenier) worries about his older brother Mikey (Johnathon Schaech), who can't seem to find a steady job. His concern is heightened when a local cop named Sal (John Cusack) informs him of his brother's criminal behavior, which includes selling drugs.

On top of dealing cocaine, Mikey has also gotten himself involved with a dangerous and tempestuous crime boss named Eddie King (Nicolas Cage). And when Mikey can't pay back one of his drug debts, Eddie arranges for his mobsters to attack Mikey and kidnap his daughter Alexis (Abbie Gayle).

Now it's up to JP and Sal to find out where Alexis is and save both father and daughter from certain death.