Arthur 3: The War of the Two Worlds 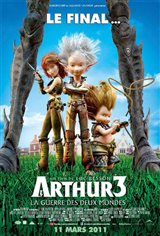 Evil Maltazard is now seven feet tall and roaming the world in order to form an army of giant henchmen so he can rule over the universe. Arthur, who is still one of the tiny Minimoys, goes in pursuit, accompanied by his beloved Princess Selenia and her faithful little brother Betameche. At his grandfather's house, Arthur searches for an elixir that will allow him to regain his human size and appearance, but is stopped by Darko, Maltazard's son.