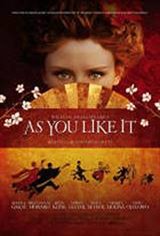 Rosalind (Bryce Dallas Howard) goes to live with her cousin Celia (Romolai Garai) when her father, Duke Senior, is usurped of his throne by his brother, Duke Frederick, Celia’s father. Duke Senior flees to the Forest of Ardenne with his loyal followers. While strolling through the forest, Rosalind meets Orlando, who has likewise been treated poorly by his brother, Oliver. Rosalind and Orlando fall instantly in love. Rosalind is subsequently thrown out by her uncle and she and Celia flee to the forest——Rosalind disguised as a boy named Ganymede while Celia pretending to be a girl named Aliena.

They meet up with Orlando, who doesn’t recognize Rosalind and confides his lovesickness to her. Still pretending to be Ganymede, she promises to cure him of his lovesickness if he pretends she is Rosalind and woo her. Meanwhile, a woman named Phoebe rejects the advances of Silvius when she falls in love with Ganymede.