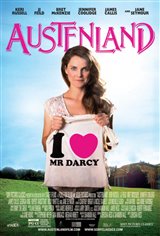 Jane Hayes (Keri Russell) is a woman in her early thirties who is absolutely obsessed with Jane Austen's classic novel Pride and Prejudice. In her mind, no one can compare to the amazing Mr. Darcy, as played by Colin Firth in the BBC TV adaption of the book.

She decides to take a trip to Austenland, a resort in Britain that caters to Austen fans, run by Mrs. Wattlesbrook (Jane Seymour). Customers are dressed in period clothing, while actors are onhand to provide similar experiences to those in the book. However, although two men, including Mr. Henry Nobley (JJ Field), the resident "Mr. Darcy," show an interest in her, she soon realizes she's not sure who's acting and who isn't and that maybe her fantasy isn't as clear-cut as it seemed.