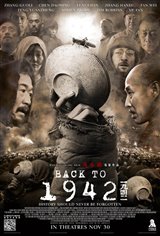 During World War II as Nationalists and Japanese troops fight, a devastating famine ravages the Henan province in China. Caused by a severe drought, windstorms, locusts, earthquakes, diseases and corruption, the famine resulted in the death of at least three million people.

In the midst of the devastation, an American journalist (Adrien Brody) is trying to make sense of what's happening around him and eventually comes to realize that there may be a greater connection between it all than he once thought.

Based on the bestselling Chinese novel Remembering 1942 by Liu Zhengyun.