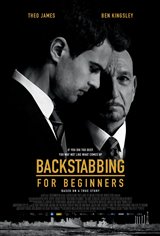 Michael Sullivan (Theo James) is hired by U.N. undersecretary Pasha (Ben Kingsley) to be an aide at the United Nations, working in the Oil-for-Food Programme, which involves the UN managing the sale of Iraqi oil and using the profits to provide humanitarian relief, especially for children in need.

Michael, who travels to the Middle East as part of his job, finds out that his predecessor was murdered. Approached by the CIA and asked to keep an eye open for corruption within the programme, Michael is reluctant to spy for them, but when he finds "after service" fees on some documents, he believes they may be kickbacks. The knowledge sets him on a collision course with the organization‘s leadership, as he risks not only his life, but the lives of those around him.

Based on the memoir Backstabbing for Beginners: My Crash Course in International Diplomacy by Michael Soussan.