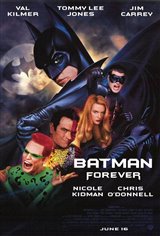 Batman/Bruce Wayne (Val Kilmer), broods as he ponders strange dreams about his parents' death and escapes his own near-demise at the hands of Two-Face (Tommy Lee Jones), a former district attorney driven insane and turned into a master criminal when a gangster throws acid in his face.

Meanwhile, as sexy psychologist Chase Meridian (Nicole Kidman) tries to analyze and seduce both Bruce Wayne and Batman, Wayne Enterprises employee Edward Nygma (Jim Carrey) reacts badly to getting fired, using his self-invented mind-energy device to transform into the super-intelligent Riddler. The Riddler teams up with Two-Face to bring down Batman and drain the minds of Gotham City residents with his device, while Batman gets some much-needed help in the form of circus performer Dick Grayson (Chris O'Donnell), out for vengeance after being orphaned by Two-Face.