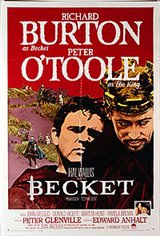 A historical costume drama of the grandest order, "Becket" is the true story of the friendship between King Henry II and Thomas à Becket, a royal courtier and confidant whom Henry appoints as Archbishop of Canterbury.

Once proposed for the office, Becket immediately perceives what the King does not: that his job as head of the Church will inevitably bring him into conflict with the King's interests. Until that point, he had been the King's closest friend and beloved companion, serving him faithfully in all things despite Henry's attitude towards the Church.

However, he sees that as Archbishop he will be unable to take so nonchalant an attitude, and so vigorously objects to the plan.

The basic theme covering separation of church and state reverberates as it did between King Henry VIII and Thomas More, 400 years later [as famously recounted in "A Man for All Seasons"] and still reverberates today. As Becket takes his duties with the church more seriously, their lifelong friendship is strenuously tested.

He finds himself increasingly at odds with the King, setting off a chain of events that will culminate in tragedy.