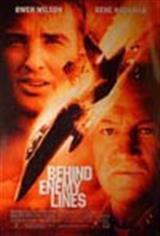 Lieutenant Chris Burnett (Wilson) is eager to fly a F/A -18 Superhornet jet into combat. But his commanding officer, Admiral Reigart (Hackman), won't allow it, ordering Burnett to spy and take photographs of the enemy's movements instead.

When Burnett and his pilot, Lt. Michael Stackhouse (Macht), are shot down on a routine reconnaissance mission, Stackhouse is killed and Burnett suddenly finds himself alone, trapped and hunted by two rebels behind enemy lines. Although Admiral Reigart is ordered to leave him where he is, he decides to take a small force into enemy territory to rescue Burnett.