Behind Her Eyes (Netflix) 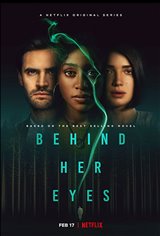 Louise (Simona Brown) is a single mother with an adorable seven-year-old son, Adam. She goes out one night to have a drink with a girlfriend, but her friend doesn't show up. As she goes to leave, she bumps into a stranger and spills his drink. Mortified, she offers to buy him another and they start talking. Although they really hit it off and he starts to kiss her, he pulls away at the last minute, embarrassed, makes an excuse and leaves.

The next day, when Louise arrives at her part-time job as a secretary at a psychiatrist's office, she sees the man there, with his wife. As it turns out, his name is David (Tom Bateman) and he is her new boss. Not long after, she bumps into his wife, Adele (Eve Hewson) on the street. Adele, new in town and desperate for a friend, invites Louise to have coffee with her. They soon become friends, going out to the gym together and hanging out at each other's places. But as time goes on, Louise begins to see that there's something strange about David and Adele's marriage. Despite the warning signs, she gets more and more involved in their lives.

Based on the novel by Sarah Pinborough.