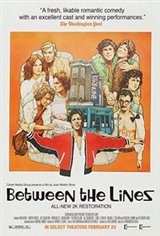 Director Joan Micklin Silver's follow-up to her acclaimed debut, Hester Street, is a more ambitious film that manages to be both an entertaining comedy and a pointed look at the corrupting power of money on an idealistic enterprise. Writer Fred Barron's characters are all associated with a weekly alternative newspaper in Boston, modeled after the Phoenix. (Silver did once work on the Village Voice, but this enterprise is several rungs below that esteemed paper.) Harry (John Heard) is an ambitious reporter romantically involved with Abbie (Lindsay Crouse), the paper's star photographer. Michael (Stephen Collins) is a writer trying to work on a novel and stay faithful to his loving wife, Laura (Gwen Welles), while Max (Jeff Goldblum), the paper's rock critic, shamelessly uses his job to try to pick up women. Lynn (Jill Eikenberry), a typist who is the paper's mother-hen figure, is also its most principled employee. When a publishing mogul (Lane Smith) buys the paper and promises changes that will compromise its aggressive political stance in favor of more lifestyle articles, Lynn resigns, and it's clear to the group that their carefree days are behind them.