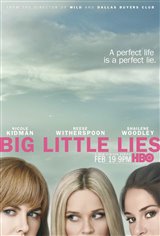 This seven-episode limited series is set in the wealthy town of Monterey. When a body is found, the cops have to dig into the lives of everyone involved.

This tale tells the story of a group of mothers whose first-grade kids all go to the same public school. Madeline Martha Mackenzie (Reese Witherspoon) is the one to be feared as she is the reigning queen, the one who knows all. She befriends the new mom on the block, Jane Chapman (Shailene Woodley) and introduces her to her best friend Celeste Wright (Nicole Kidman), a beautiful mom of two who is married to a younger man (Alexander Skarsgård).

This series is based on the book by Liane Moriarty.