Big Star: Nothing Can Hurt Me 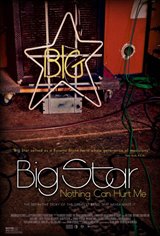 Following the legendary Memphis band Big Star, which never achieved mainstream or commercial success. Despite that, Big Star's three albums have become critically lauded touchstones of the rock music canon and the band is widely regarded as one of the greatest bands in rock history. Big Star has been cited as an influence by artists including REM, The Replacements, Belle & Sebastian, Elliot Smith and Flaming Lips, to name just a few.

The movie traces the origins and history of the legendary band from the late 1960s with lead singer Alex Chilton sky-rocketing to stardom at the age of 16 with The Box Tops and their #1 hit, "The Letter," through to their implosion due to failed record sales, personal breakdowns and the tragic death of Chris Bell in 1978. Includes never-before-seen footage and photos of the band, in-depth interviews and a rousing musical tribute by the bands they inspired.