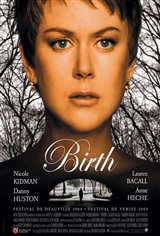 Watch Trailer
Ten years after the death of her beloved husband Sean, Anna (Nicole Kidman) is finally ready to emerge from the shadow of grief and begin a new chapter in her life. She has agreed to marry Joseph (Danny Huston), a good-humored, cultured man who has patiently courted her for three years. Anna's decision pleases her mother Eleanor (Lauren Bacall), an elegant and commanding woman.

Then a young boy approaches Anna at a party, asking to speak to her privately. She indulges what appears to be a childish whim. He tells her that he is her dead husband Sean, and warns her not to marry Joseph. She is angry at first and has him removed from the party, but he continues to contact her. His knowledge of her dead husband's life forces Anna to begin to question whether or not he's telling the truth.