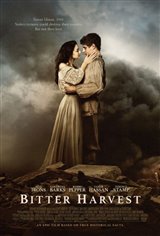 Two lovers, artist Yuri (Max Irons) and his childhood sweetheart Natalka (Samantha Barks), are struggling to survive while caught in cruel dictator Joseph Stalin's brutal and deliberate starvation of the Ukrainian people from 1932 to 1933, known as the Holodomor (extermination by famine). This act of genocide remains to this day shrouded in secrecy and misinformation.

After escaping from a Soviet prison, Yuri joins the anti-Bolshevik resistance movement, which would lead up to the Russian Civil War. He must overcome Stalin’s push to build a strong Soviet Union, while attempting to fight for the liberation of Ukraine, and also to reunite with Natalka.