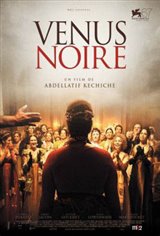 London, 1810. Former Afrikaans farmer Hendrick Caezar puts the Hottentot Venus, a black woman with a huge buttocks, on exhibit, claiming he captured her the jungle. The African Institute is alerted to this degrading spectacle of a woman in a cage and they launch suit against Caezar for slavery. In court the woman's true identity is revealed: Saartjie Baartman, 25, is Caezar's former servant who has given her consent to be placed on exhibit. Convinced that the Hottentot Venus number would be the rage in Paris salons, Reaux, a bear trainer, convinces Caezar and Saartjie to move to France with him. There, they attract the attention of Georges Cuvier, an anatomist who offers Caezar a large sum to examine his protegée. When Saartjie refuses to cooperate, in spite, Caezar sells her to Reaux, who forces her into prostitution against her will.