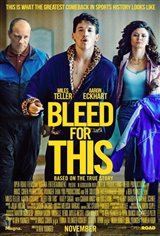 Based on the inspirational true story of one of sport's most incredible comebacks, the film follows Rhode Island native Vinny Pazienza (Miles Teller), a five-time world boxing champion and colorful brawler nicknamed "The Pazmanian Devil."

Throughout his career, Vinny won several matches. But in 1991, one month after he won the light middleweight championship title, he broke his neck in a devastating car accident and was told he may never walk again. Under the tutelage of coach Kevin Rooney (Aaron Eckhart), however, Vinny waged an epic return to boxing, much to the concern of his parents Louise and Angelo (Katey Sagal and Ciarán Hinds).