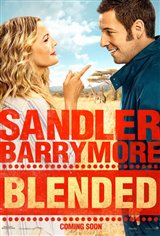 Single parents Lauren (Drew Barrymore) and Jim (Adam Sandler) go on a blind date that's a disaster when she spits her food up on him and he drinks her beer. The only thing they agree on at the end of the date is that they never want to see each other again.

When Jim realizes the restaurant mixed up their credit cards, he goes to Lauren's house to switch them back and meets her sister, who happens to be dating his boss. However, she says the relationship is over, just as they were about to go on a trip to Africa. She gives her ticket to Lauren, who decides to take her boys. Meanwhile, Jim calls his boss and offers to buy the tickets from him so he can take his daughters. Neither realize what the other has done until they bump into each other at the same luxurious African safari resort and have to share a suite.