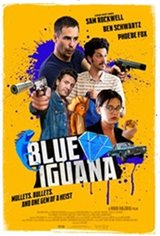 Eddie and Paul agree, and violating their parole, they leave for London to pull off the job. However, they soon find themselves in over their heads when things go very wrong and they get mixed up with a crime boss (Peter Polycarpou) and his psychopathic, mullet-haired henchman Deacon (Peter Ferdinando).