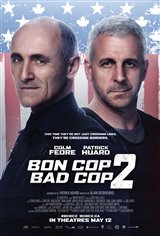 It's been six years since Martin Ward (Colm Feore) and David Bouchard (Patrick Huard) met when they were forced to work together after a crime was committed on the border of Quebec and Ontario. Although the two have remained friends, time takes its toll and it's been nearly a year since they've spoken.

However, when they discover a car theft ring that turns out to be a lot more than they bargained for, Ward and Bouchard team up again. They discover the stolen cars are going to be used as bombs in a terrorist attack. They have to stop the operation and save the President of the United States.

Canadian Connection: Filmed in Quebec. The director, writer, cast and crew are Canadian.