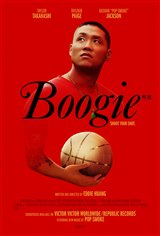 Alfred Chin (Taylor Takahashi), better known as Boogie, is a Chinese-American high school student who dreams of making it into the NBA. But Boogie knows that the path to his dream is a difficult one, as everyone looks at an Asian basketball player as a joke. But Boogie has a plan. If he proves himself and beats Monk (Bashar Jackson/Pop Smoke) then maybe he will have a shot in the NBA.

Back home his life is not easy. His mother takes care of everything, but does not believe in his dream, and his father is irresponsible, but is in his corner alongside Boogie's girlfriend, Eleanor (Taylour Paige). Fighting not only for his dream, Eleanor pushes Boogie to also fight for his identity and people, as he is determined to see his plans come to fruition.