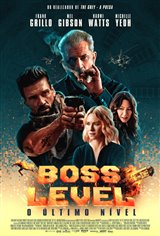 Roy Pulver (Frank Grillo) is an a former special forces agent who finds himself reliving the day of his murder in an endless cycle.

Each day he awakes to a machete-wielding hitman coming for him and a helicopter with machine guns blazing outside the window. As he tries to figure out why this is happening and how he can escape the time loop, he comes up with a theory.

His ex-wife Jemma (Naomi Watts) was was killed by a gang of murderers, led by Colonel Clive Vector (Mel Gibson), as she was working on a time-travel machine. He believes Jemma may have put him in a time loop so he can replay the events each day, until he figures out how to put a stop to it and save not only himself, but Jemma and their son (Rio Grillo).