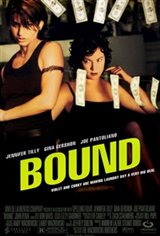 Gina Gershon and Jennifer Tilly nearly set the screen on fire in this clever, female-powered twist on the standard Mob caper film. Gershon is Corky, an ex-con renovating the apartment next door to where Tilly's Violet lives.

Violet is the moll of psychotic gangster Caesar (Joe Pantoliano), who uses the apartment as an occasional location for meetings and beatings, and also uses Violet as an occasional plaything for his Mob cronies. Violet is attracted to the super-sexy Corky, and the two begin an intense affair.

Corky hatches a plot to escape with $2 million that Caesar is planning to give to a Mob boss, and the mayhem escalates from there.