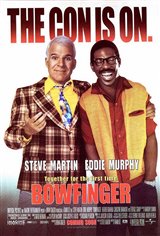 Desperate for a hit film, has-been Hollywood director Bobby Bowfinger (Steve Martin) comes across a script written by a friend. Convinced of its quality, he decides to take a last shot at fame and fortune. The script is not an easy sell, but a famous producer promises to do it provided Kit Ramsey (Eddie Murphy), Hollywood's number one star, is in it.

Bobby approaches Kit - who turns him down - but decides to shoot the film anyway by filming the unsuspecting actor when he is not looking. He assembles the cheapest team available in Southern California: an aspiring beauty from Ohio; a diva who is just a little over the hill; a key-holding gopher from a major studio and a goon hired away from burger-flipping to round out the cast. But when his plan goes awry, he hires a slow-witted look-alike named Jiff (also played by Murphy) to be the body double.